Franck Vigroux and Matthew Bourne have developed a theatrical realisation of Yevgeny Zamyatin’s novel, WE, for piano, voice, electronics and lighting design. With text excerpts from this work, minimal piano textures, sensitive electronics and lighting design, they aim to make an impactful statement that is a stark, original rendering of Zamyatin’s work. The conception for this collaboration began as a France Culture radiophonic production in 2011. This project is an opportunity to strengthen their relationship with French and British partners and supporting institutions, while providing an opportunity to engage in making new work. They can also develop their collaborative work into new territory in both France and the UK. 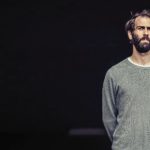