Dedalus celebrated the British composer John White’s 80th anniversary, with a project of experimental music, playing John White’s famous or original pieces, such as Drinking and Hooting Machine, Cello and Tuba Machine or Knee and Desk Machine. Dedalus invited British musicians closed to John White and to British experimental music to play with them some of his works. 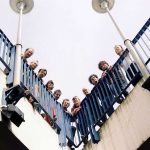